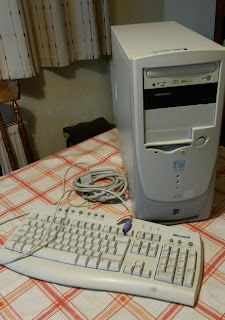 Up to now I have been using a modern and powerful multicore i7 laptop on a daily basis. It suits my needs but I still miss a desktop for various reasons - I want a large monitor with a high resolution, I want a proper keyboard, I want to be able to use a dual monitor setup for coding on. But the biggest reason for getting it up and running is, just for the hell of it :)

This was a top of the line gaming rig when I bought it and had the best graphics card that I could purchase at the time. The CPU got upgraded at some stage - I think I originally bought the PC with a 2600+ processor and upgraded it later on. The DVD re-writer was added later on too.

After booting it up for the the first time since 2010, there's few jobs that immediately presented themselves. I found a dualboot setup with Windows XP and Ubuntu 9.10 on it and neither would boot. I don't want to keep either OS and so a clean OS install will fix this. Both the DVD and CD drive will not work and so need to repaired or replaced. I need to get a monitor - the original LG 19" CRT Flatron monitor was a beast and i think went to the re-cycling centre for being too heavy. A cheap wireless network card would be a good investment too.

I'm interested to see how it all pans out - especially when a decent monitor and the 5.1 surround sound speakers are hooked up. I think it will be perfectly usable running GNU/Linux with a moderately light desktop environment - it's not totally ancient after all.

The end game is to have a fast and usable PC with some form of GNU/Linux or BSD running on it. I'll do a couple more posts with some updates on the project as things progress.