My next job for this PC is to get a modern Operating System installed. This was hampered by both of the CD drives being non-functional. To compound this problem, USB booting is not supported by the motherboard and so that avenue for getting an operating system installer booted up was not an option.

So on to repairing the CD burner drive. When you press the eject button, but the tray would not slide out and would only move slightly. Aparently this is a fairly common fault with older drives and cleaning a little belt will fix this. There are loads of youtube videos out there for this problem, here's the one that I used. After doing my cleaning, the drive was back to normal. 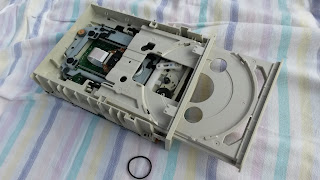 The second thing that I looked into was increasing the RAM which was 1GB of PC2700 non-ecc RAM. More RAM is always better, especially with applications getting more and more RAM hungry as time goes by. According to specs for my ASUS A7V333 motherboard, the maximum RAM that I can install is 3GB - this is a 32 bit machine after all and I have three RAM slots. I went through a friends spare RAM collection and found a spare 1GB PC2700 memory module. Feeling lucky I installed it onto the motherboard and booted it up. The RAM was detected without any drama and it now has two 512MB and one 1GB memory modules to make a healthy enough total of 2GB RAM.

Choosing an operating system is next on my list, front runners are Debian, and Arch. In the next post I'll hopefully have an Operating System installed and will be testing system performance.